I’d always presumed I would wear a wig if I lost my hair after chemo.  My friend Chloe had given me her old ‘breast cancer’ wig which was a good fit and the same colour as my hair, so it was left in a drawer until Doomsday.  The fact was, when my hair did start to fall out, my scalp became very itchy and bumpy with some sort of rash.  My instinct was to wrap it in something very soft, but the inside of the wig was harsh and coarse.  What to do? 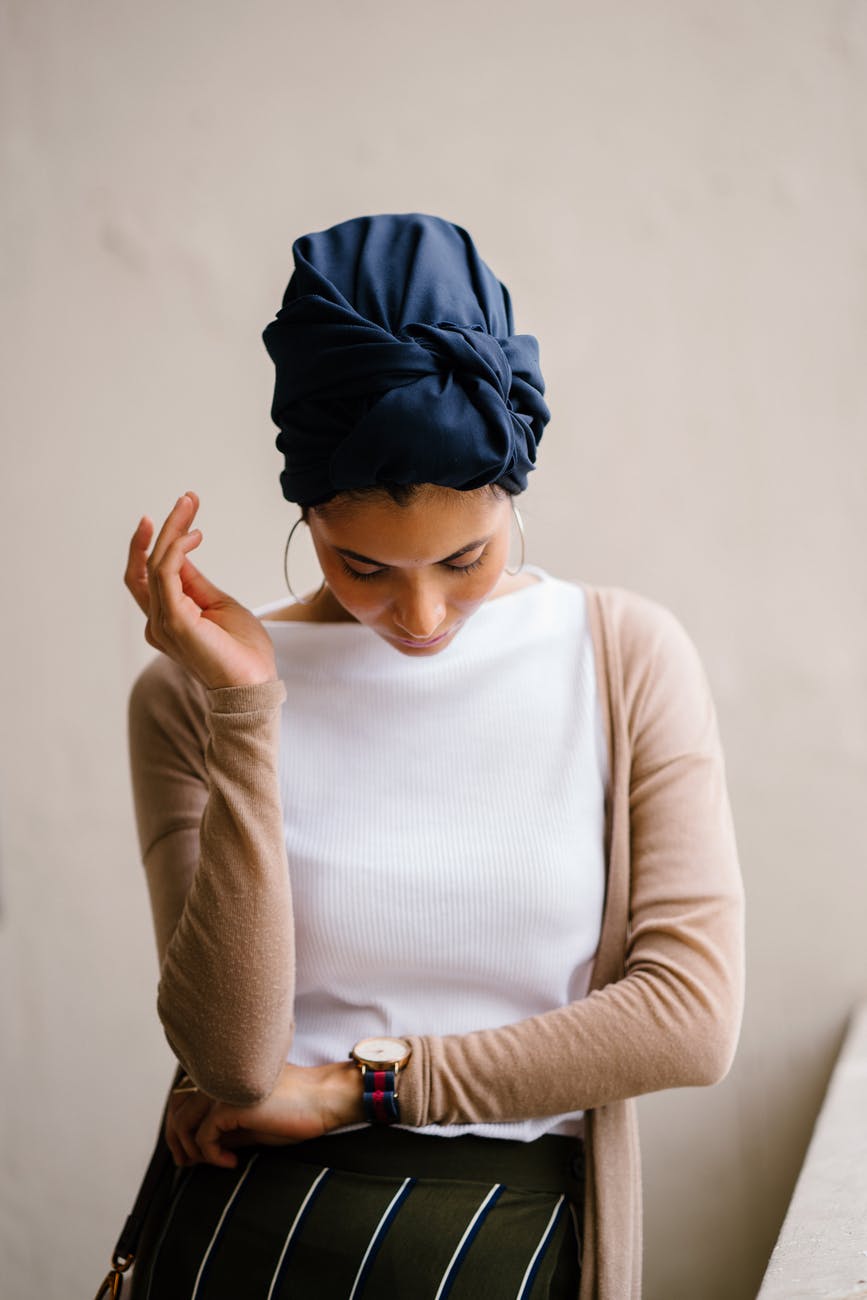 At the point my hair began to fall out, my friend Philippa came round to see me.  I was distressed because it had started to appear whenever I sat down – the sofa, the dining room table, my pillow……she suggested wearing a turban, and set about looking on the internet for scarf tying tutorials.  Now the thing about Philippa is that she is an ex-Vogue stylist, so I knew I was in good hands.  Philippa also runs a cool online brocante shop Duck’s Nest Vintage www.etsy.com/shop/Ducksnestvintage?ref=ss_profile

Rather than look like I should be scrubbing steps, I tried to channel Sophia Loren or Liz Taylor on board a Mediterranean yacht in the sixties.  It was also winter, and our house is very drafty, so wearing a scarf round my head also kept out the excruciating cold which my newly shaved head experienced.  I found a large oblong scarf the easiest to wrap around my head, rather than the square scarves which create a different look.   Here’s the link for Liberty scarf tying tips: www.youtube.com/watch?v=0k4xMtHQMdg

Later on, as my hair started to grow back, and the weather became warmer, it became difficult to wear scarves around my head, as it was just too hot.  It was also the period when I’d lost my eyelashes and eyebrows, so I was feeling particularly gloomy about my looks.  I’d been given lots of beautiful square silk scarves – some from my stepdaughter who’d recently visited Beirut.  My hair was growing back, but it was more like a peach fuzz, so it couldn’t really be exposed, together with the fact that I had developed a sensitivity to the sun due to the chemo.  My friend Jeny Sugg came to the rescue.  She often wears funky scarves, and has a cool retro style, and persuaded me to create a more fun look with large glasses, hiding my lack of eyebrows and eyelashes, together with square scarves tied with more volume on top.  Here’s the link https://www.youtube.com/watch?v=HXWgVQweGVY&t=276s.  Jen makes beautiful handmade items such as knickers, cards and cushions – she also has an online shop https://www.etsy.com/shop/frenchkitschdesigns?ref=search_shop_redirect

I now have a Pixie cut hairstyle, so I am scarf-free.  It’s such a relief to have my head uncovered, but looking back the scarf provided little moments of joy during a pretty dark period.